Marzia Liuzza is graduated in Tourism, Culture and Territorial Development. She is committed to responsible, sustainable and quality tourism. For this reason she deals with its tangible and intangible aspects, with a focus on the local communities and cultural heritage. She’s the author of this article about Acqui Terme and its territory.

Acqui Terme. The city of water between history and culture
Acqui Terme is a real Piedmontese jewel, nestled between vineyards and breathtaking landscapes, certified as a UNESCO World Heritage Site.
The area offers a mix of experiences ranging from wine and food to thermalism, to outdoor sports, including Nordic walking, trekking, and parachuting.
The municipality is committed to promoting slow and responsible tourism, making the most of local beauty and products, and never has environmental protection been such a sensitive issue as it is today. More and more tourists are looking for authentic experiences with nature, with respect for the territory.
For this very reason, before the pandemic, the Tourism Department organized bike tours to discover the Acqui area, suitable for both young people and sports enthusiasts, as well as families.
Several paths that start from Acqui and wind their way through the evocative landscapes, including the Sentiero del pellegrino (Pilgrim’s Path), which connects Acqui Terme to Tiglieto, and was created on the occasion of the Jubilee held in 2000; the Giro delle 5 torri (Tour of the 5 towers), a circular route that runs through the hills of the Langa Astigiana passing by the towers of Monastero, San Giorgio Scarampi, Olmo Gentile, Roccaverano and Vengore; the Anello di Bric Breton (Ring of Bric Breton) goes along the high ground of Bric Breton that borders Piedmont and Liguria; finally, the tour to discover the Big Benches, large panoramic benches scattered throughout the territory. 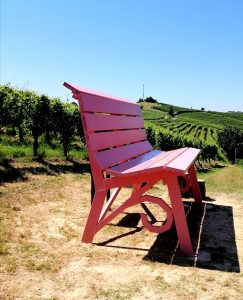 One of the Big Benches

For those who choose a relaxing holiday and want to discover the culture and history of Acqui, the city offers several spas and cultural sites.
Water is undoubtedly the main protagonist of the territory, with its curative and beneficial properties. It has always had a cultural and symbolic value. Historically, it was linked to the worship of deities or saints, while today it is associated more with a need for physical and mental relaxation, and pilgrimages for healing are also linked to it.
The UN has established Word Water Day to commemorate the importance of water, which this year will be held on 22 March.
The thermal springs of Acqui Terme are the Bollente spring, the waters of the Lago delle sorgenti and the Acqua marcia. The town was already renowned for its very hot waters in Roman times. The Bollente and Lago delle sorgenti are high-temperature springs that come to the surface uncontaminated, managing to maintain their beneficial properties.
As well as regenerating mind and body at the spa, there are several cultural sites on offer in the city. For example, Roman remains including the Roman Aqueduct, one of the most intact aqueducts in the whole of Piedmont, the Caldarium or Roman swimming pool which, together with the Amphitheatre, was in the Aquae Statiellae district, the Roman Fountain, the Roman Theatre and the Via Cassino excavations, a building used to produce ceramic pottery.
Also, the jewel in the crown of the Acqui territory is Villa Ottolenghi in Alto Monferrato. This exclusive villa is an example of the synoptic art of the Ventennio (Fascist period), where guided tours of art and culture are organized and where it is also possible to stay overnight. 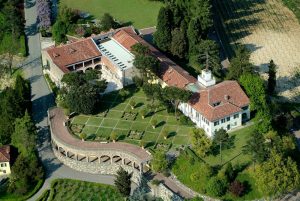 Villa Ottolenghi seen from above

Acqui Terme and the European Historic Thermal Towns Association
Acqui Terme is also a founding member of the European Historic Thermal Towns Association, also known as EHTTA.
The association was founded in 2009 by the municipalities of Salsomaggiore Terme, Acqui Terme, Bath (England), Spa (Germany), Vichy (France) and Ourense (Spain) and in 2010 Ehtta obtained the recognition of Cultural Route of the Council of Europe.
The European Association of Historic Spa Towns unites a network of 51 towns in 18 countries including Italy, France, Turkey, Hungary, and Portugal.
Through the networked cities, Ehtta aims to enhance the thermal, historical, artistic, and architectural heritage across Europe.
Thermalism is promoted not only for body care but also as a cultural and historical background that runs through these countries. Indeed, spas have a strong link with the historical, cultural, and urban heritage. Historically, they were places of body care and social inclusion. At the same time, they acquired greater importance and consequently there was a need for more and more urban intervention.
In the past, spa tourism was based on three key elements: health, entertainment, and hospitality, which are still the strong points of the Acqui Terme tourist offer today. For this reason, the towns that are part of this prestigious network, must organize themselves around four key elements: thermal baths, casinos, grand hotels, and parks, where it is possible to spend time in contact with nature and take long walks. 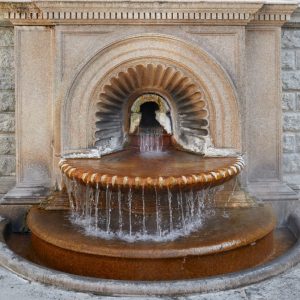 What future lies ahead with covid?
Acqui Terme is working to find a solution that will allow the town to restart despite the covid.
In an interview with me, the Mayor of Acqui Terme and vice-president of Ehtta, Lorenzo Lucchini, told me how they are already working on a post-covid approach.
One of the most important projects is to present to the Piedmont Region a scientific reappraisal of the waters, linking seven Piedmontese realities, different from the spa point of view, to enhance the value of the water of the territory. An ambitious project, the one proposed by Acqui Terme, also wants to involve high school institutes so that each town has up-to-date studies on the geological complex, also reducing the waste of water. The aim is to create a strategic asset to relaunch tourism in Piedmont.
A further project in collaboration with Russia is to make the thermal waters of Acqui available to treat patients suffering from covid -19.
A great gesture of solidarity at such a delicate time.

I take this opportunity to thank the Mayor of Acqui Terme, Lorenzo Lucchini, for his willingness to be interviewed.
Marzia Liuzza